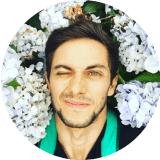 A typical flight from London to NYC emits about 1,180 tonnes of CO2e. Is that a lot? Is that not much? How does it compare with other natural and human-made emissions?

Picturing it is quite hard, so we did it for you, have a look:

Greenhouse gas emissions are typically measured in tCO2e (tonnes of CO2 equivalent), but how much is a tonne and what does “equivalent” mean?

To make it easier, here’s a couple things we’re familiar with to visualise these weights:

Volcanoes are pretty mighty, right? They spew fire and gases all year round, across the globe, above surface and underwater. So we wondered, how do our emissions stack against volcanoes?

If you thought they emit more, you’re wrong. Yearly human-made emissions top those coming from volcanoes globally, both above and underwater. And not by a little bit more. 139 times more.

With the images of the 2019–2020 bushfire season in Australia and San Francisco’s orange-coloured skies still fresh in our memory, global wildfires can be a useful comparison to make against human emissions.

Yes, we win again. Summer 2021 was particularly bad – almost twice as bad as 2020 – as estimated by the Copernicus Atmosphere Monitoring Service.

Wildfires globally emitted 6.45 gigatonnes of CO2. That puts us at almost 8:1 over wildfires.

OK, but what about that  ☄️ asteroid that killed the dinos?

Scientists from the Planetary Science Institute, Tucson, AZ and the Imperial College London have recently (2018) re-estimated the impact of the Chicxulub asteroid on Earth’s atmosphere.

The asteroid that impacted on Earth 66 million years ago, led to the extinction of about 75% of plant and animal species on the planet. This was not so much because of the impact itself – which had local consequences – but rather because of the large amounts of gases it launched into the atmosphere, particularly 425 ± 160 Gt of CO2, which led to global climate changes.

The 425 ± 160 Gt estimated are 8.5:1 compared to human emissions in 2018. But asteroid impacts of that magnitude don’t happen yearly. Our emissions instead pile up over time. In the last 10 years, assuming about 50 Gt of CO2e each year, we’ve emitted more greenhouse gases than the asteroid impact. 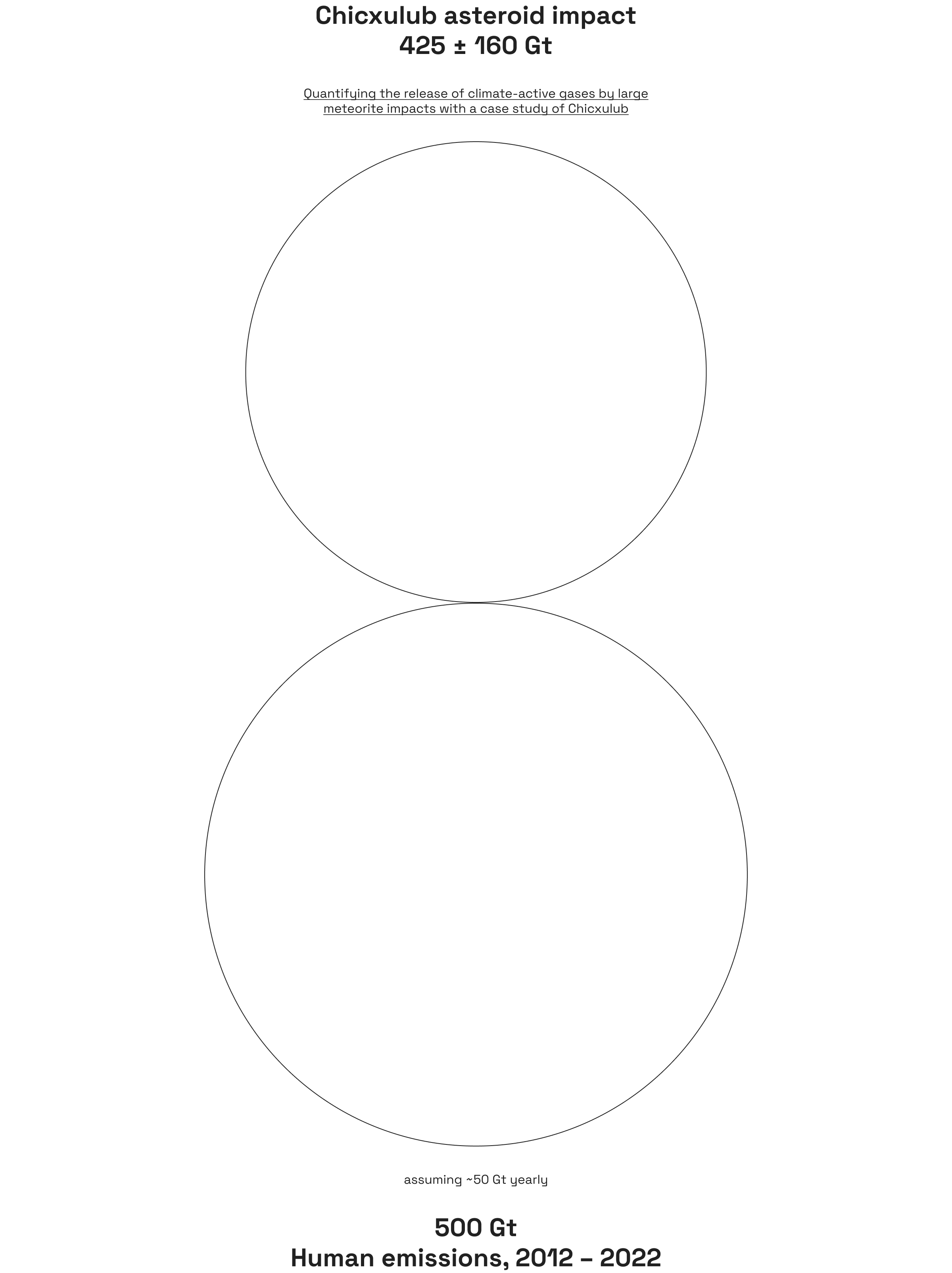 ⚡️ Energy use to 🚜 land use: human emissions, by sector

We’ve established we produce roughly 50 Gt of CO2e every year, and looked at how that compares against other natural emissions. If we break down human emissions, where do they actually come from?

Looking at 2016 data from ourworldindata.org, the top contenders in emissions production are all in the energy sector, except for road transport:

This is because we still use a lot of fossil fuels to produce the energy we use in our industries, in our shops and at home.

Below is a comprehensive table showing emissions broken down by sector, highlighting the magnitude of each individual area. 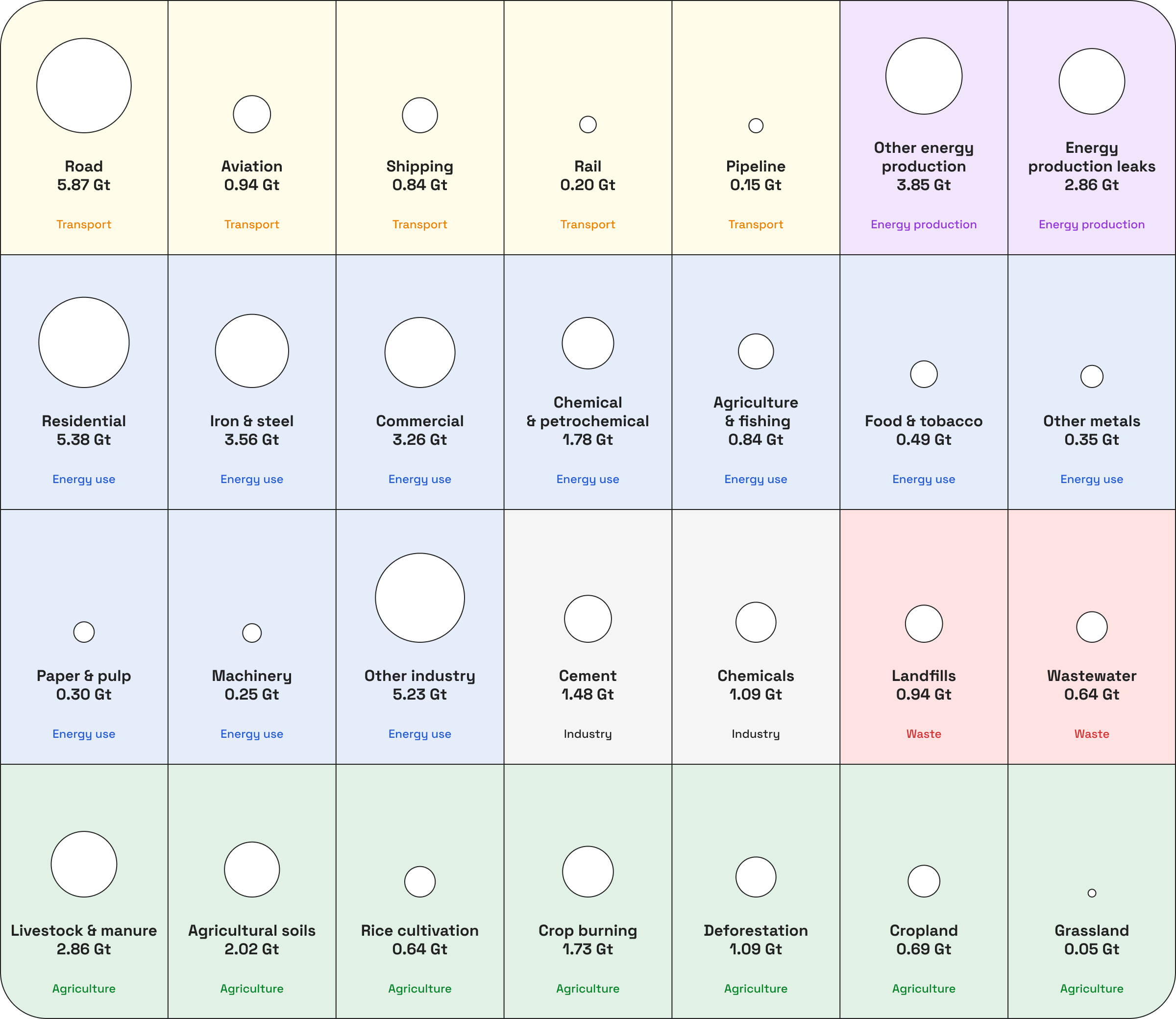 Using data from Carbon Cloud, we looked at the emissions generated when getting a variety of foods to our tables. These numbers are for the production of 1kg of food (e.g. 1kg of strawberries) and its delivery to shops in the UK.

There are a 5 main factors that impact the emissions generated:

When assessing how much a particular food item might impact, think of these 5 variables:

In general, agriculture and processing are by far where the bulk of the emissions come from.

Flying ✈️ to ferrying ⛴: how much CO2 per km travelled?

According to data from ourworldindata.org this is how much CO2 different transportation methods emit per kilometer (0.62 miles) travelled.

We dwarf even mighty natural sources like volcanoes, wildfires and asteroids slamming onto Earth. We do so across human activities, there’s no single thing we produce or do that is alone responsible for it.

However, being aware of what emits more, being able to visualise it, can help us make the climate cost of our activities visible.

This climate cost has so far been obfuscated from our view, making it hard for us to account for it when making decisions. Knowing the difference in impact can steer our decisions in what we buy, how we buy it and nudge the global economy away from options that we can no longer sustain.